With only 17 days until the NBA Trade deadline, you expect rumors to be flying left and right. Most of it can be chalked up to smoke screens and teams/agents trying to negotiate through the media, but every once in a while we get a Shams/Woj bomb with actual substance. I don't really count Brad Stevens' trade of Noah Vonleh to the Spurs just so they could cut him all that important, so this move by the Lakers/Wizards for my money is the official kick off of this year's trade season.

If you pay attention to the internet, you could have sensed a Rui Hachimura trade was on the horizon simply by following his likes. About 10 days ago, he told the world he hated his life as a member of the Wizards and was ready for a new home 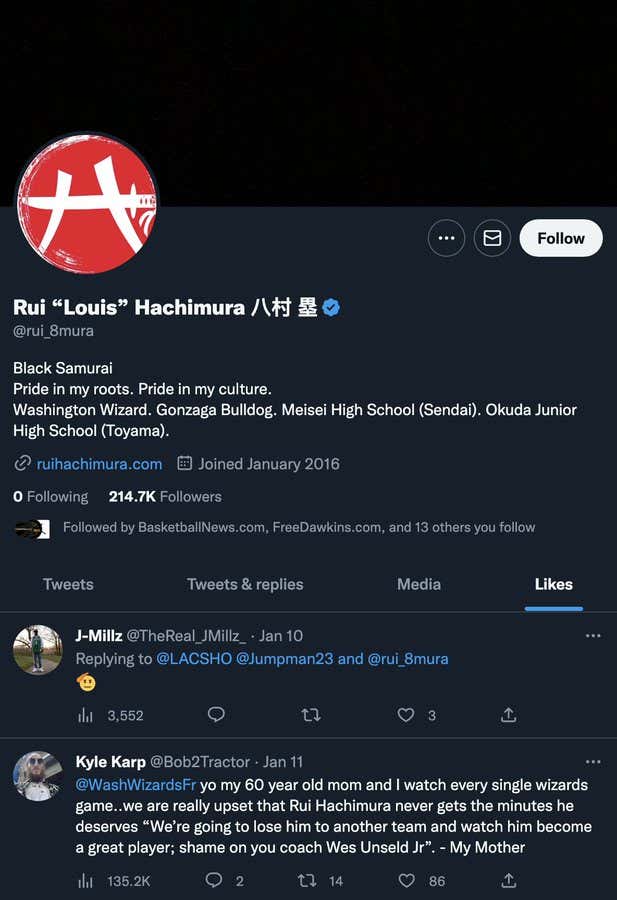 From there, just 5 days later you started to hear more and more rumors about how the Wizards could be looking to move him

and now here we are. Things in the league happen fast, and honestly I'm surprised more teams weren't in on Rui or at least able to beat this Lakers price.

We all know the Lakers need to improve their roster, so for them to do that while also not having to unload either of those unprotected 2027 or 2029 first round picks is pretty good. Who gives a shit about Kendrick Nunn and some 2nd round picks? Something tells me the Lakers will be able to survive without Nunn's 6 points a game on 40/32% shooting. Even if you don't think the world of Rui as a player, that price alone makes this a good move by the Lakers. You get a player who has a skillset you need, is a RFA this summer so you can match whatever offer he gets, and who knows maybe this summer you throw him into a larger trade if that becomes an option.

It does also show how volatile the value of young players can be. Rui was a lottery pick for the Wizards, is only 24, and has shown to at least be capable at the NBA level

So much of the NBA is situation and opportunity, and I would imagine that playing next to LeBron will only help. It also gives them some options when AD is back in terms of playing Rui at the 4 rather than LeBron. I guess we shouldn't be so surprised these two teams pulled off a trade since they have a history of doing just that, and from the Lakers perspective, it's a swing you should absolutely be taking right now. You have to show LeBron that you are not punting on the season but at the same time aren't going to do something stupid in order to bring in talent.

This was Rui literally 2 days ago when he dropped 30

so it's not as if he has no talent. He may not have taken that massive leap Wizards fans may have wanted, but he's not terrible and if you can get him for practically nothing, you do it every single time. Normally I would love shitting on the Lakers for any decision they make, but I can't do that with this one.

The Lakers are still in the lottery at the moment which is an issue since they don't own their own pick, but they are just 2 games from the 6 seed and 2.5 from a top 5 seed. AD should be back pretty soon, LeBron still looks incredible, and now adding another player with a pulse should only help. If it doesn't work out, fine. Pass on matching his offers in RFA and move on. But if he works out? You could have a piece to help for whenever the Lakers are forced to live in a post-LeBron world.

Hopefully, this is the trade that finally gets things moving and we get more and more deals over the next few days. With how close both conferences are everything is still wide open for the most part, so I'm going to need fewer reports like this