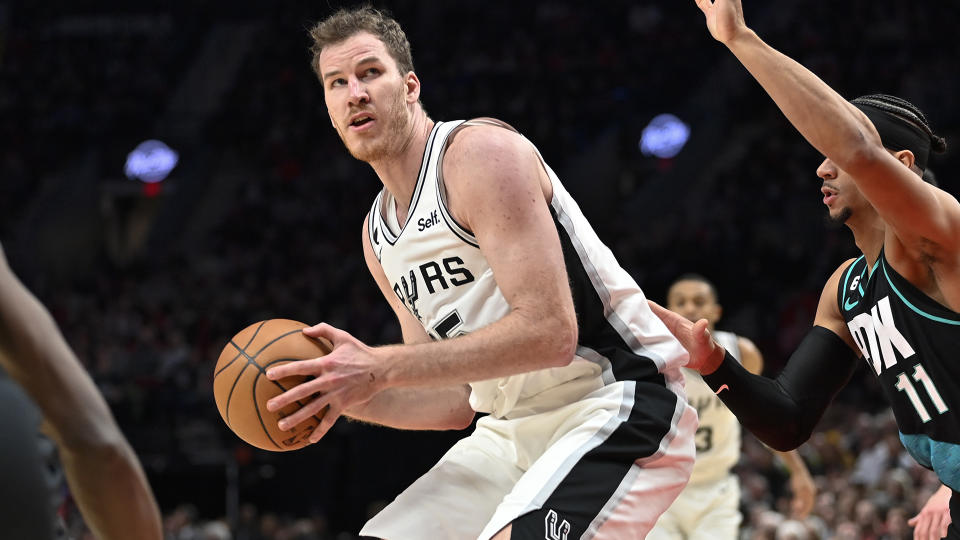 Jakob Poeltl continues to be linked to the Raptors ahead of the Feb. 9 trade deadline. (Photo by Alika Jenner/Getty Images)

The Toronto Raptors have emerged as a potential suitor for San Antonio Spurs centre Jakob Poeltl, according to multiple reports.

On Tuesday, Yahoo Sports’ Jake Fischer reported the big man remains a target for the Raptors, as he reported in December. The Athletic’s Shams Charania also reported on Toronto’s interest in the 27-year-old Tuesday, saying the Austria native “has gained significant trade interest from teams such as the Toronto Raptors and Boston Celtics.”

Per Charania’s report, Poeltl reportedly rejected San Antonio’s maximum extension offer of four years and $58 million before the season. He will likely command north of $20 million per season this summer as an unrestricted free agent. Poeltl reportedly intends on playing for a contender — as well as earning a lucrative contract — and with the Spurs ostensibly setting themselves up for the Victor Wembanyama sweepstakes, they disqualify themselves from the conversation.

The addition of Poeltl, who Toronto drafted ninth overall in 2016, would augment the team’s frontcourt, creating a level of stability at their centre position that has been lacking this season. In his last season with the Raptors, Poeltl averaged 6.9 points, 4.8 rebounds, and 0.7 assists. His numbers have jumped across the board since then, with averages of 12.3 points, 9.4 rebounds and 2.9 assists per game this season. His passing stats don’t do him justice, though, as the Spurs often run their offence through Poeltl, having him orchestrate screens, cutting lanes and dribble handoff schemes.

Charania also reported the Raptors have been among the many teams to inquire about Detroit Pistons forward Bojan Bogdanovic, who is having a career year averaging 21.2 points per game while shooting 41.5 percent from three-point range.

VanVleet, 28, has been at the centre of Toronto’s trade rumours as of late, so much so that the NBA champion had to clear up speculation that he declined a contract extension worth $114 million.

If VanVleet does decide to enter free agency this summer, there will surely be a slew of potential suitors. Per Charania, two teams that are reportedly interested in acquiring the 2022 All-Star are the Phoenix Suns and Orlando Magic. The former might look to recalibrate at the point guard spot if they fall short in this year’s postseason, not to mention Chris Paul is nearing the twilight of his career; the latter could use VanVleet to establish a veteran presence and lead their group of young thoroughbreds.

Fischer casted doubt on VanVleet’s trade candidacy, saying the team is only expected to seriously listen to offers for guard Gary Trent Jr. He also reported Toronto has shown interest in Hornets forward Jalen McDaniels, who like Trent, will also be a free agent this summer but is expected to command a salary around $10 million, about $15 million less than what Trent is expected to seek on the open market.

Toronto is one of the more scintillating teams to watch as the trade deadline looms. Currently in the 11th spot in the Eastern Conference with a record of 20-24, the Raptors find themselves in a quandary, stuck between “tanking” and unloading their mainstays, and sticking with the group they currently have.

“What they’re not gonna do is be in the middle,” a Western Conference executive told Fischer.

“They’ve told teams they’re going to do something,” said an assistant general manager.