Paul Rudd is now a vitally important part of the MCU in his role as Scott Lang and Ant-Man. And after formulating the plan to bring half the universe back to life before defeating Thanos in Avengers: Endgame, he'll have another powerful force of nature to face in his third solo movie - Jonathan Majors' Kang the Conqueror.

Rudd is also known as one of the MCU's funniest actors in the same way Ant-Man is one of the franchise's funniest characters, which has led to an interesting conversation running the past couple of years about how he could have defeated Thanos. That plan would have seen Scott Lang shrink down and enter the area on Thanos' body where the sun definitely doesn't shine before expanding and ripping him to shreds.

This joke has even been addressed in a non-canon piece of MCU content, with Rudd's Ant-Man addressing the theory in the "Avengers: Quantum Encounter" dining adventure aboard the Disney Wish cruise ship, bluntly calling it "gross" before being cut off from explaining further.

Now, Rudd addressed this theory in a more real-world setting while comparing his battle against Thanos to his upcoming struggle with Kang the Conqueror. 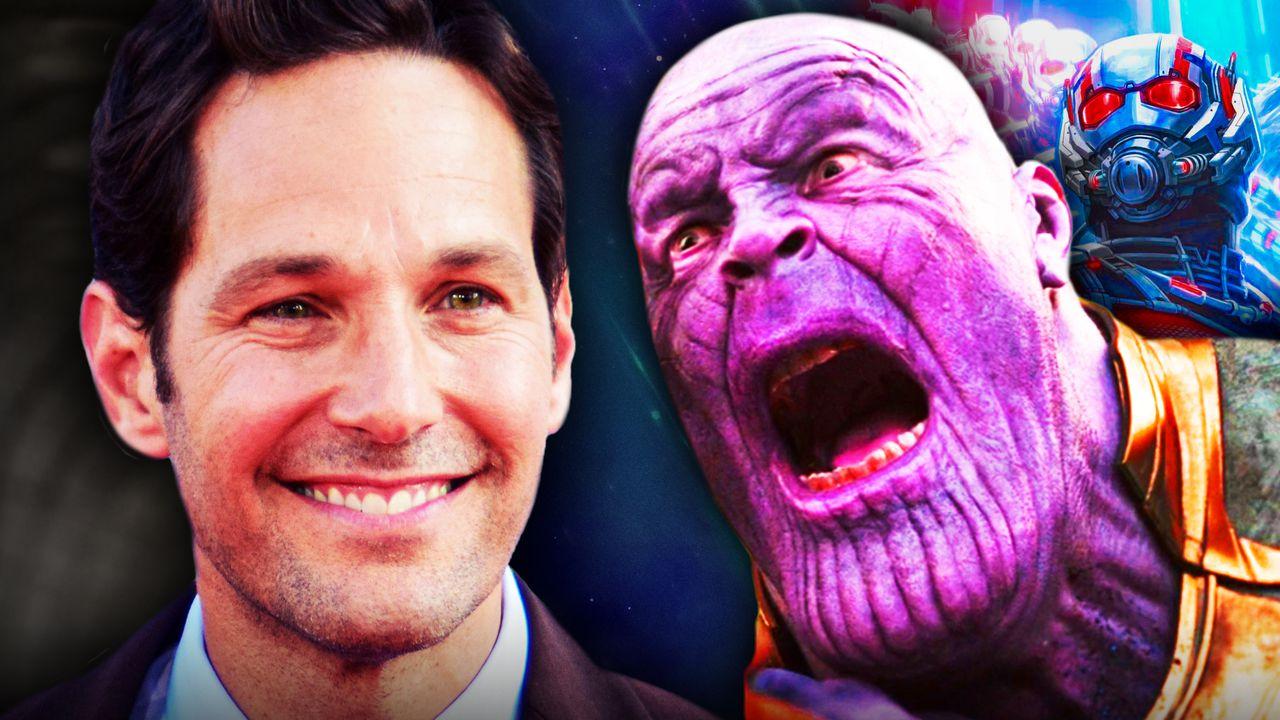 Speaking with Entertainment Tonight, Ant-Man and the Wasp: Quantumania star Paul Rudd shared his thoughts on the idea of Ant-Man defeating Thanos by crawling up Thanos' butt and expanding.

Rudd is well aware of the theory, and although he knows some fans see it as a "missed opportunity," he also jokingly teased that fans will have to wait until the next movie releases to see if it's corrected:

"I know what you're talking about, a way to kill Thanos. And that some people consider it a missed opportunity. Well, I guess you'll just have to see the next one."

But while he thinks this would work against Thanos, he isn't as confident that it would work as well against Jonathan Majors' Kang the Conqueror:

"I don't know if you can take Kang out that way either, Kang's pretty tough, and I gotta assume all parts of him are tough."

When asked what he could comment on rumors claiming that Ant-Man may meat his demise in Quantumania, Rudd only said that things will "be really interesting" when the threequel debuts.

How Will Ant-Man Actually Defeat Kang?

Seeing that the MCU is a franchise that operates almost exclusively under a PG-13 rating, outside of the upcoming Deadpool 3, it's almost a guarantee that Ant-Man won't be climbing up anybody's butt to win a battle. But even hearing that Paul Rudd has thought about it is certainly an entertaining piece of news as the MCU fandom prepares for Ant-Man's next adventure.

With the option to climb up Kang's rear firmly out of the picture, Scott Lang will have to figure out another way to stop the powerful supervillain, even though this movie will only hold him at bay until later projects like Avengers: The Kang Dynasty.

Majors' impact will be felt all across the Multiverse Saga, with Paul Rudd being only the second leading MCU character to truly interact with him this deeply after Tom Hiddleston's experience in last year's Loki. And after seeing the first tease of his prime form in action during the trailer for Ant-Man and the Wasp: Quantumania, fans will be anxious to find out exactly how the Avengers will combat Kang's true power.

Ant-Man and the Wasp: Quantumania will debut in theaters on February 17, 2023.

Tag: kang the conqueror ant man 3, ant man 3 kang the conqueror reddit, will kang the conqueror be in ant man 3, kang the conqueror mcu ant man 3, who defeated kang the conqueror. Paul Rudd Discusses Thanos, Man Actually Defeat Kang.
Related News
Paul Rudd Addresses If Ant-Man's Thanos Butt Plan Will Defeat Kang
Paul Rudd’s Scott Lang Faces Off Against Jonathan Majors’ Kang In New ‘Ant-Man And The Wasp: Quantumania’ Trailer
Latest Marvel News: Christmas comes early thanks to the Guardians while Paul Rudd answers the ‘Ant-Man 3’ question we’re all asking
Paul Rudd Talks Upcoming 'Ant-Man' Installment and Viral Fan Theories (Exclusive)
What time and date does 'Ant-Man and the Wasp: Quantumania' release?
Ant-Man and the Wasp: Quantumania trailer teases an epic battle with Jonathan Majors' Kang
Ant-Man 3’s Trailer Has Fans Comparing It To Spy Kids 3, And I Can’t Look Away
Ant-Man And The Wasp: Quantumania Plot Easter Eggs And Details Revealed In The Trailer
Ant-Man and the Wasp: Quantumania’s First Trailer Makes a Big Impact
Who does Bill Murray play in ‘Ant-Man and the Wasp: Quantumania?’
After Thanos, Avengers will fight with Kang, watch Ant-Man and the Wasp Trailer, the world of MCU is about to change
''Looks like Cap n' Crunch'': Netizens divided over Bill Murray's cameo in Ant-Man and The Wasp: Quantumania trailer
Latest News
VFX is the ‘Thing’ for Tom Turnbull on Tim Burton’s ‘Wednesday’
Best Kratom for Pain in 2023 – The Connection between Kratom and Pain Relief
Judge to decide fate of relocated General Iron’s Southeast Side operation by spring
Spreading the joy: Longer parade routes OKd for Mardi Gras
Cindy Williams Dies: ‘Laverne & Shirley‘ Star Who Appeared In ’American Graffiti’ & ‘The Conversation’ Was 75
2 monkeys missing from Dallas Zoo believed to be taken; fourth incident to occur this month
NHL trade deadline 2023 tracker: Analyzing Bo Horvat deal, other moves before March 3
Stu’s Notes: Tennessee Should Rename All Its Teams ‘Lady Vols’
COLUMN: ‘The Last of Us’ episode 3: bad days and good days
Cindy Williams, half of TV's 'Laverne & Shirley,' dies at 75
All 50 Movies and Shows Netflix Is Releasing in 2023
How Linda Ronstadt's best song got a second lease on life in HBO's 'The Last of Us'
Former Twitter executives to testify on company’s handling of Hunter Biden story
Super Bowl Snackday: 70 percent of fans stick to appetizers on gameday
Starting Tomorrow, Marvel Snap Will Let You Battle Your Friends