Even after Spire Entertainment, the agency behind Omega X, denied the allegations that its CEO had verbally and physically assaulted the band’s members, more evidence and witnesses are spreading fast online.

On Monday evening, SBS Entertainment News, which first reported the case the day before, released exclusive video footage of what it claims to be Spire Entertainment’s CEO, referred to only by her surname Kang and known to be in her 50s, yelling at Omega X bandmates.

In the video, a woman is shouting at several men in a parking lot outside a building.

“Do f—ers like you think you deserve love?” the woman shouts.

One of the members, Jaehan, kneels on the floor with his head bent low, showing signs of panic disorder. The woman shouts at him, “You’re so tired you can die? Kim Jaehan, old man, quit being an idol (singer) since you’re so sick every day,” using Jaehan’s full name. She proceeds to scream at the singer to stand up multiple times.

As a bandmate asks her to stop, Kang says, “You know how many times I fell down? I’m really sick, so sick that I feel like dying.” She then accuses the members of not caring for her, saying, “Have you ever cared for me when I was having a hard time?” 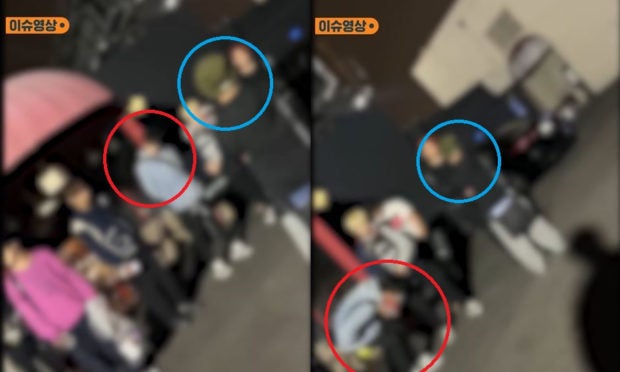 The SBS video shows Kang continuing to verbally abuse Omega X members even as they returned to the hotel. As Kang continues to yell at the boys in front of the elevator, member Taedong tries to stop her, saying, “(Jaehan) is about to collapse,” Kang shouts, “I’m already down,” and pulls Jaehan’s clothes and throws him to the floor. The video shows Jaehan picking himself up from the floor and crying until he gets into the elevator.

The video was unveiled just after Spire Entertainment released an official statement on Monday afternoon about the alleged violence on Omega X bandmates by the CEO. A fan of the band had made the allegation on Twitter, posting an audio clip of what the writer claims to be Kang yelling at the bandmates.

In the clip, a woman yells at several males, shouting, “Do you want me to stop?” “Who do think you are?” and “Stand up,” followed by a male voice that says, “(He’s) about to collapse.” This is followed by an audible thud like someone falling on the ground, followed by whimpering cries.

Spire Entertainment’s official statement did not address the alleged violence, but only apologized for causing the controversy and said that there had been a misunderstanding.

“The incident happened as we were having a dinner after the group finished its monthlong tour from Guadalajara, Mexico to Los Angeles from Sept. 16 to Oct. 22, 2022,” the statement read.

“It was after we’d completed the tour. Omega X members and the agency (staff members) were talking about how we could improve ourselves to do better next time. And we came to talk about the frustrations we had toward each other. There, we became emotional and raised our voices. But all the misunderstandings have been cleared,” the statement continued.

The statement did not include any statements from the bandmates nor explanations about their conditions, only causing further backlash from fans. The hashtag “#ProtectOmegaX” began trending on Twitter, as international fans called for the members’ protection.

Public outrage worsened when SBS made another exclusive report on Monday afternoon that the bandmates did not take their flight home as scheduled. According to the report, Omega X members had ended their world tour on Saturday in Los Angeles and were set to take the plane to South Korea on Sunday, local time, but their ticket reservations had been cancelled early that morning. It was only a few hours after the abuse allegations by the CEO and the audio clip had spread online.

According to the report, SBS spoke with Kang over phone. She denied that the bandmates’ flights were cancelled because of the rumors.

“We’d been discussing the cancellation for three days because the members might have to board the flight with fans,” Kang was quoted as saying. She added, “It’s not true that the members are being detained in the US.”

Kang denied the allegations that she had assaulted Omega X members, claiming it was “an allegation made against the company by an anti-fan.”

“I was distressed from pulling all-nighters for days and working so hard that I had a nosebleed, but the bandmates wouldn’t comfort me or care for me, and I’d become frustrated. But I usually treat them with much respect,” Kang told SBS. 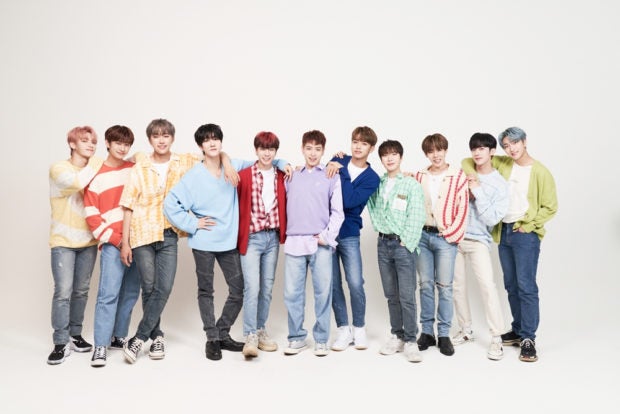 Omega X is an 11-piece K-pop boy band that debuted under Spire Entertainment in June 2021 with its first EP “Vamos.” The band consists of 11 men all in their twenties: Jaehan, Hwichan, Sebin, Hangyeom, Taedong, Xen, Jehyun, Kevin, Jung-hoon, Hyuk and Yechan.

On Saturday, the band had closed its first global concert tour “Connect: Don’t Give Up” in Los Angeles, and was slated to fly home on Sunday before their tickets were cancelled by the agency.

On Tuesday morning, SBS reported that the eleven bandmates and their agency’s manager took a flight to South Korea from Los Angeles on Monday. The report stated that some of the members had to pay for their own tickets with the help of their parents.

The article added that Kang continued to be noisy at the hotel where the bandmates had stayed at on Sunday, and that the local police was called to the scene twice that night.

Meanwhile, the controversy has sparked outrage from fellow K-pop artists. On Tuesday, Dong-gyu, Jaehan’s former bandmate from the now-disbanded group Spectrum, took to his Instagram and wrote, “You’re the anti(-fan). I won’t curse at you here because I’ve said it out loud many times. How dare someone like you…to my brother,” and shared a screenshot of the SBS video, apparently directing his message at Kang.

Donggyu and Jaehan were a part of boy band Spectrum from May 2018 until June 2020.

Don't miss out on the latest news and information.