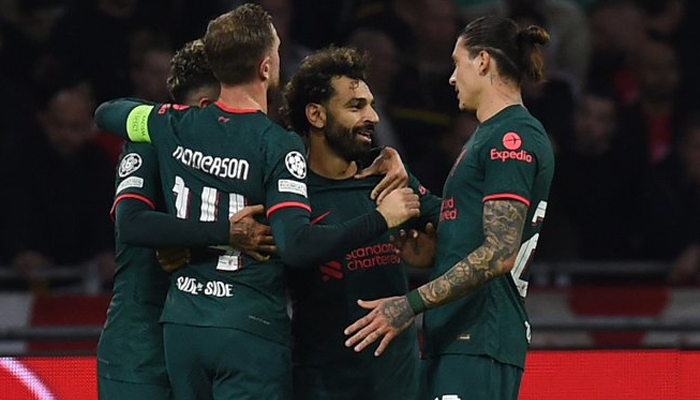 AMSTERDAM: Liverpool manager Jurgen Klopp said on Wednesday he is hoping the 3-0 win over Ajax to progress to the last 16 of the Champions League can help lift his side´s sluggish Premier League form.

The Reds have now won as many Champions League games this season as they have in 11 Premier League matches after a fourth consecutive European win in Amsterdam.

Mohamed Salah, Darwin Nunez and Harvey Elliott were on target as they reached the knockout stage for a sixth consecutive season.

"We are through to the knockouts and I will never take that for granted," said Klopp.

"Really helpful for the club, of course it gives the lift. Tonight we all feel great and we have a few days to prepare for Leeds."

Klopp´s men still have a mountain to climb next week when Napoli visit Anfield if they are to finish top of Group A.

Liverpool trail the Italians by three points and need to better Napoli´s 4-1 win when the sides met last month to get the better of the head-to-head record.

Defeat ends Ajax´s chances of reaching the next round and the Dutch champions were left to rue not taking advantage of a fast start as they flew out the traps.

Steven Berghuis should have opened the scoring after just two minutes when he fired against the post with just Alisson Becker to beat.

Berghuis then shot just wide from range and Dusan Tadic should have done better when he blasted into the body of Trent Alexander-Arnold at the back post.

Of the Egyptian´s nine goals this season, six have come in the Champions League and he produced a cool finish over Remko Pasveer from Jordan Henderson´s through ball to settle Liverpool´s nerves.

The visitors should have been out of sight before half-time but for an astonishing miss from Nunez, who hit the post with the goal gaping from Roberto Firmino´s unselfish pass.

Nunez has had a rollercoaster start to his career with the Reds after a 75 million euro ($74 million) move from Benfica and he quickly made amends after the break.

The Uruguayan rose highest to power Andy Robertson´s corner in off the far post on 49 minutes.

"Darwin was really angry with himself at half time," said Robertson.

"I sat next to him at half time and told him I would put a cross in to his head for him to score."

Three minutes later, Liverpool were cruising when Salah picked out the run of Elliott, who fired high past Pasveer from a narrow angle.

Klopp pointed much of the blame for his side´s lack of consistency in the opening months of the season to a catalogue of injuries.

And with another five games still to come before the World Cup break next month, a commanding lead meant the visitors could take their foot off the gas in the final half-hour with Nunez, Fabinho and Henderson among those handed a rest by Klopp.