Lakers forward LeBron James (6) drives to the basket against Clippers forward Nicolas Batum (33) in the first half at Crypto.com Arena on Tuesday.

Prior to the Lakers and the Clippers playing Tuesday night in Los Angeles, Rob Pelinka sat with Rui Hachimura directly to his left, the Lakers’ future the topic of conversation.

The former lottery pick is set to debut Wednesday, when the team could also get Anthony Davis back for the first time in more than a month.

Austin Reaves cleared an important hurdle earlier Tuesday by having a full-speed workout. And Lonnie Walker IV, he’s considered to be even closer.

Soon, the Lakers will be better.

But, nights like Tuesday against the Clippers, beg the obvious question – is better going to be good enough?

Despite entering the night just one game behind the Clippers in the loss column, the differences between a team trying to figure it out and a team that’s trying to figure out if they have enough were pretty obvious.

By the time Darvin Ham gave up on the game, LeBron James sat slumped back in a chair on the bench. Russell Westbrook and Dennis Schroder argued. And the Lakers, soon to be beaten 133-115, were soundly defeated.

The Clippers drained three after three while physically and skillfully dominating the Lakers. In areas they were able to survive against the Memphis Grizzlies and at Portland, the Clippers faltered –James left to do much of it by himself.

For the first time in his NBA career, James eclipsed the 40-point mark against the Clippers – the last of the 30 NBA teams to hold him under that mark. He did it on a one-handed slam. His next dunk one possession later cut the Clippers’ lead to 14 and an assist on the next to Russell Westbrook got the Clippers withing 11. After a Paul George drive, James made his career-high ninth three-point shot to cut the lead down to 10.

But momentum swung violently back to the Clippers after two Westbrook turnovers helped trigger an 8-0 Clippers run that iced the game, ensuring that Tyronn Lue would remain undefeated against their in-town competition.

The Clipped hit 19 three-point shots, Paul George leading them with 27 while Kawhi Leonard scored 25 and Norman Powell had 22.

Westbrook had 17 but shot 4-of-13 from the field. He only committed two turnovers, but they came at a brutal time – zapping the Lakers’ comeback.

Help could be coming – Ham not saying Davis would or wouldn’t be available Wednesday against the Spurs – only that he’d be re-evaluated by doctors in the morning.

Other topics pregame – though, were less vague.

Speaking ahead of the Feb. 9 trade deadline, Pelinka again reiterated the team’s desires to improve the roster. Rarely, though, has he stated the terms so clearly. 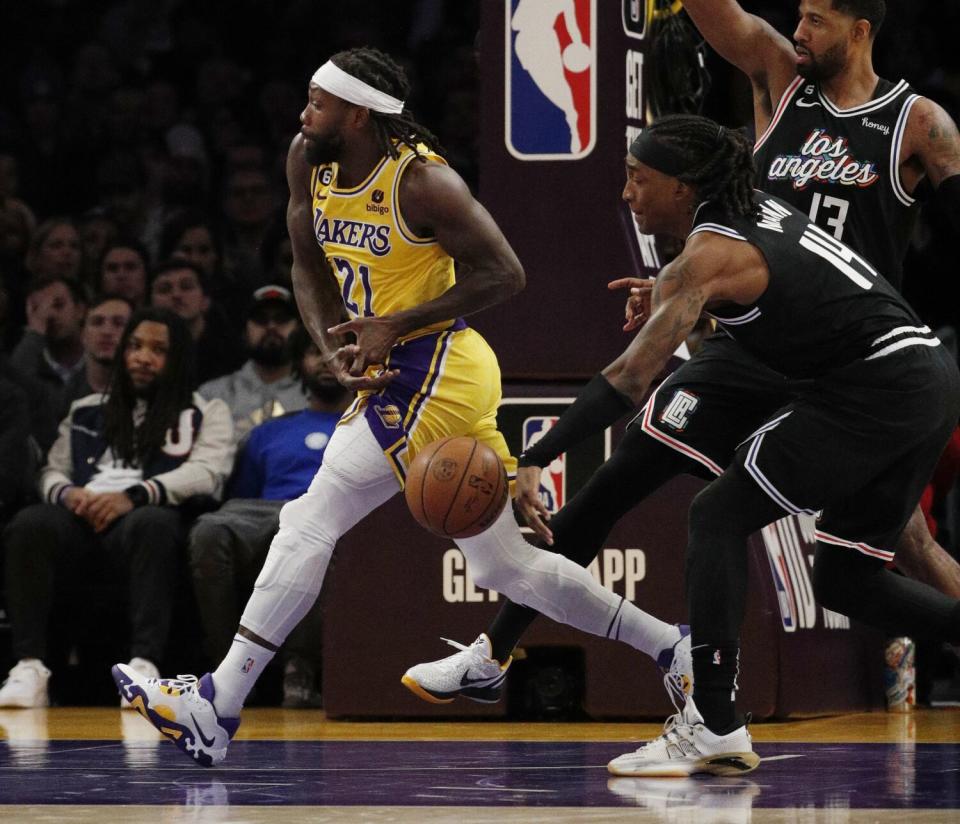 Clippers guard Terance Mann (14) strips the ball from Lakers guard Patrick Beverley (21) in the first half at Crypto.com Arena on Tuesday.

“The calculus for the Lakers is to win a championship or not. There's no in-between or incremental growth,” Pelinka said Tuesday. “So as we analyze opportunities, we have to do it through that lens. And, I said this at the beginning of the season, if there's an opportunity to get all the way to the end and win a championship, there's no resource we'll hold onto if we feel like that's there.

“At the same time, the completely unwise thing to do would be to shoot a bullet early and then not have it later when you have a better championship move you can make.”

The Lakers’ best assets in any deal would be their 2027 and 2029 first-round picks, and thus far, the team hasn’t found a deal that, in their mind, is worthy of putting either (or both) into play.

Hachimura’s acquisition represents somewhat of a compromise, the Lakers able to address some roster needs in the frontcourt now while dealing for a player young enough and promising enough that there’s potential for future value as well.

“You know for me, I think I can shoot the ball – 3s, I can shoot midrange, I can attack the rim,” Hachimura said. “Even off the ball, cutting and stuff is good for me. I can get a rebound and push the ball and stuff, so I can do a lot of stuff. I think it’s going to be great.”

Hachimura, who is Japanese, said playing in Los Angeles while in college at Gonzaga made him feel like Los Angeles was a place he’d like to live. Pelinka said the hope was that the deal would give the Lakers the chance to re-sign the Hachimura in the offseason.

“First, I like the weather for sure. I have family friends here, a lot of friends here,” he said. “There's a lot of Japanese people here, too. I think that made me feel like this is my home. Close to Japan – it's only nine hours from here.”

For Hachimura, that’s relatively close – a reminder that proximity can mean different things based on the situation.

For the Lakers, they certainly felt closer to contention before Tuesday’s uneven performance.

And whether its getting healthier or getting the roster better, they’re on the clock to fix it.