A look at Panic! At the Disco’s 19-year history

A look at Panic! At the Disco’s 19-year history

Panic! at the Disco, the alternative rock band with arguably the best band name in history, has undergone several changes in its 19-year history, with the one constant being frontman Brendon Urie. After Urie’s announcement that his P!ATD journey is coming to an end, it’s time to look back at the band’s journey from the streets of Las Vegas to one of the greatest rock-and-roll bands of all time. Ryan Ross and Spencer Smith formed the Blink 182 cover band Pet Salamander in high school. After rebranding to The Summer League, they added on guitarist Trevor Howell and bassist Brent Wilson. Howell didn’t last long, so they found a replacement in Urie, who attended guitar class with Wilson. After hearing Urie’s unique vocal talents, he became the lead singer and the band rebranded once again to Panic! at the Disco.

After posting a couple of their demos to Fall Out Boy bassist Pete Wentz’s posts on LiveJournal, he decided to give the high schoolers a shot and signed them on to his newly formed Fueled by Ramen imprint label DCD2 Records. They were the first band on the label and were given $10,000 to record their first album, A Fever You Can’t Sweat Out.

“I Write Sins Not Tragedies“

During a 2016 interview with Zach Sang Show, Urie discussed the lack of pressure he feels from his management, which allows him the flexibility to do what he wants.

“So if you listen to ‘I Write Sins Not Tragedies,’ first single off the first album, we recorded a girl who is 13-14 years old playing cello one note at a time and we just took them and sampled them basically and played it like an MP3.”

“I Write Sins Not Tragedies” was slow to chart, until the band released their debut music video, a circus-themed video that takes place at a wedding, showcasing a unique cast of characters. The video cemented the band’s place in history and garnered the band a Video of the Year award at the 2006 MTV Video Music Awards. The album itself was certified triple platinum in the U.S. 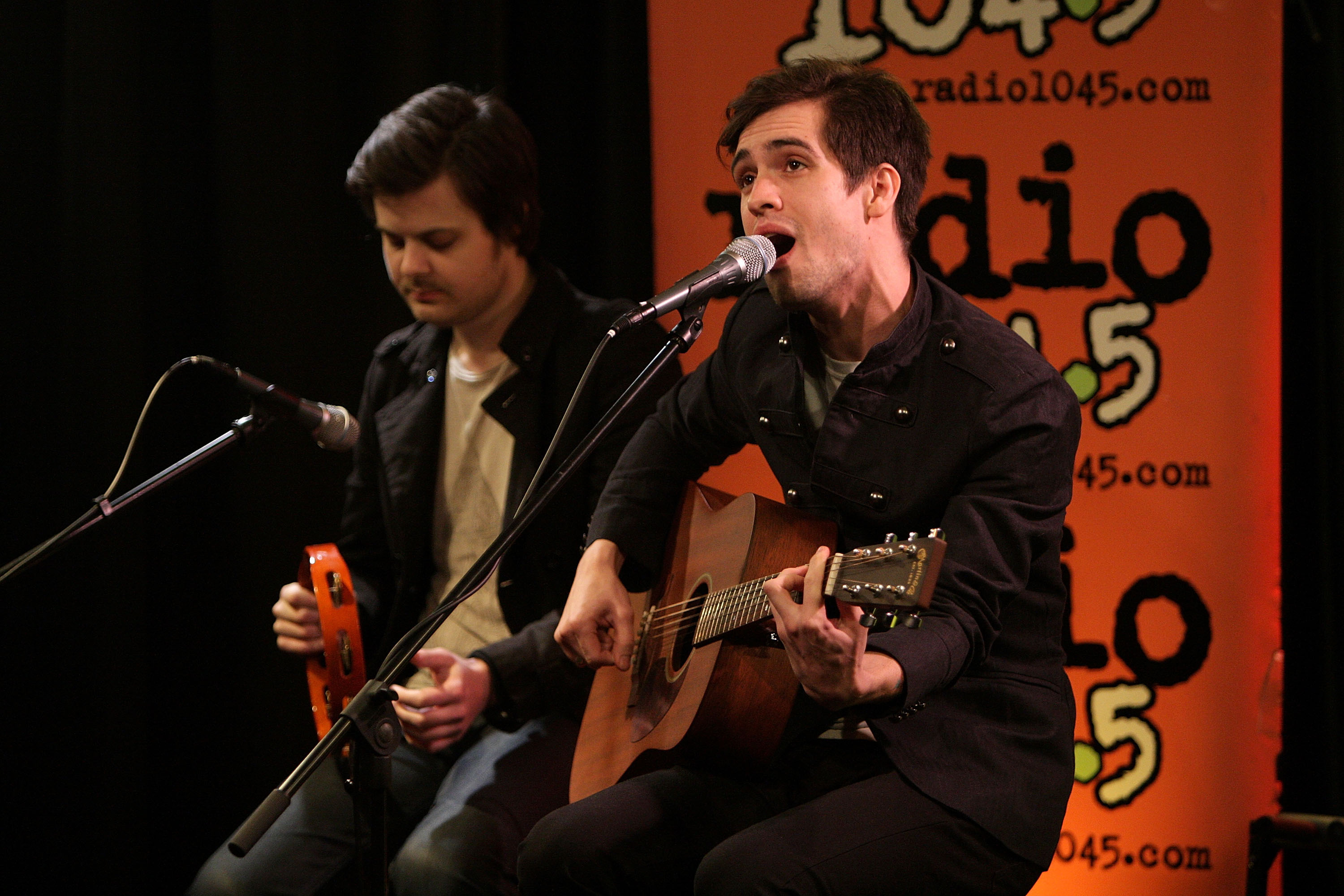 During the band’s first world tour, Wilson was replaced by bassist Jon Walker. Shortly after releasing their second album, Pretty. Odd. Ross and Walker left to form the band The Young Veins, leaving Urie and Smith as the sole band members.

Urie and Smith recorded and released “New Perspective” for the movie Jennifer’s Body, starring Megan Fox, debuting it for the first time during a live performance at San Diego Comic-Con in 2009.

Dallon Weekes was added as a full-time bassist for the band just in time for Panic! at the Disco’s Vices & Virtues tour for their third studio album, and then helped record their fourth studio album Too Weird to Live, Too Rare to Die! in 2013.

In 2013, Urie was invited to perform one of Billy Joel’s iconic songs during the Piano Man’s Kennedy Center Honors ceremony, singing the hit song “Big Shot.”

Urie, a self-proclaimed huge fan of the “Uptown Girl” singer, also covers his idol’s songs during live performances. He also regularly sings along with and performs Joel’s songs on his official Twitch channel.

Shortly before the release of Too Weird to Live, Too Rare to Die!, Smith unofficially left the band to enter rehab for an addiction to prescription drugs and alcohol. He told MTV in 2013 that he struggled with the addiction for four and a half years before finally realizing he needed to seek treatment.

“For the past four-and-a-half years I’ve been battling addiction. Well, to be honest, I’ve really been battling it for the last two years. Those first two-and-a-half years were spent in a place where I thought I had finally found the correct dosage of my personally prescribed medicine to feel ‘normal’ … In reality, I was mostly stumbling through my life hoping no one noticed I was high.”

While Smith struggled with his demons, Urie put his emotions to song, penning “This is Gospel” about his bandmate’s addiction for the “Too Weird to Live, Too Rare to Die!” album. In 2016, Urie spoke with Entertainment Tonight about the inspiration for This is Gospel.

“When I wrote This is Gospel that was about his struggle from my point of view. It was tough to have that conversation, so it was easier for me to put it to song. The song was the first time I fully addressed it (Smith’s addiction) head on. It was the catalyst for a healthy conversation and a healthy jump forward to the relationship that we still have.”

Urie said when Smith first mentioned needing to leave to seek treatment, he fully supported his decision and said they remain close friends. With several song influenced by Smith’s struggles, Too Weird to Live, Too Rare to Die! debuted at number two on the Billboard 200 album charts.

Smith officially left the band in 2015 and Weekes reverted to being touring band member only, leaving Urie as the sole member of Panic! at the Disco. Not one to back down from a challenge, Urie wrote, performed and sang all the songs for his next album Death of a Bachelor, an album inspired by his marriage to Sarah Orzechowski.

The album debuted at number one on the Billboard 200 charts and was certified double platinum. Urie described the album as something that is him, sharing a personal story to the band’s Facebook page about the songs.

“When I was a little kid and I heard a song I liked on tv, I would jump up and run to the piano to try and figure it out by ear. When I was 10 or 11, I built myself a drum kit in the garage made out of empty laundry detergent buckets, old lawn chairs, paint cans, and old trash cans. Around that time, my parents got me my first guitar. A baby acoustic. I jumped between all of these instruments constantly to satisfy the ideas I heard in my head. At this young age, I realized that music would play a huge part in my life. I had no idea.

‘Death of a Bachelor’ is in honor of those times I spent alone as a kid. Allowing music to consume me. Playing everything myself just to get the idea right and out of my head. It’s a beginning to a new era. And an homage to how it all began.

This album is me. Running to the piano. Building a drum kit. Strumming a guitar.

Around this time, Urie was also becoming more well-known for his vocal range, with him often being compared to the late Freddie Mercury.

The band’s 2018 album Pray for the Wicked featured their biggest hit to date. “High Hopes” skyrocketed to the charts, was played on radio stations everywhere and claimed Billboard’s record for the most consecutive weeks on the Hot Rock and Alternative chart. “High Hopes” remained number one for 65 weeks. Their next single “Hey Look Ma, I Made It” spent 11 weeks in the number one spot.

The catchy vocals were being sung by everyone, including the Stranger Things cast, who posted a video of them singing the song together.

While “High Hopes” was still dominating the Hot Rock and Alternative charts, Urie collaborated with pop singer Taylor Swift to sing “ME!” The bubblegum pop song was unlike anything Urie had sung before with Panic! at the Disco, but Swift said in an interview with BBC One that she was excited to collaborate with him because of his excitement level.

“He has so much fun and brings so much joy and enthusiasm to what he does that he elevates everybody else’s mood. When he walks in, everyone else goes from a seven to a 13 on the excitement scale. You don’t want to pick a collaborator who doesn’t want to be there. You want someone who’s like, ‘YES! We’re performing today!’”

The single promoted one’s individuality and embracing themselves, and broke Billboard’s biggest single-week jump in chart history. The single went on to receive a double platinum certification.

His marriage and future 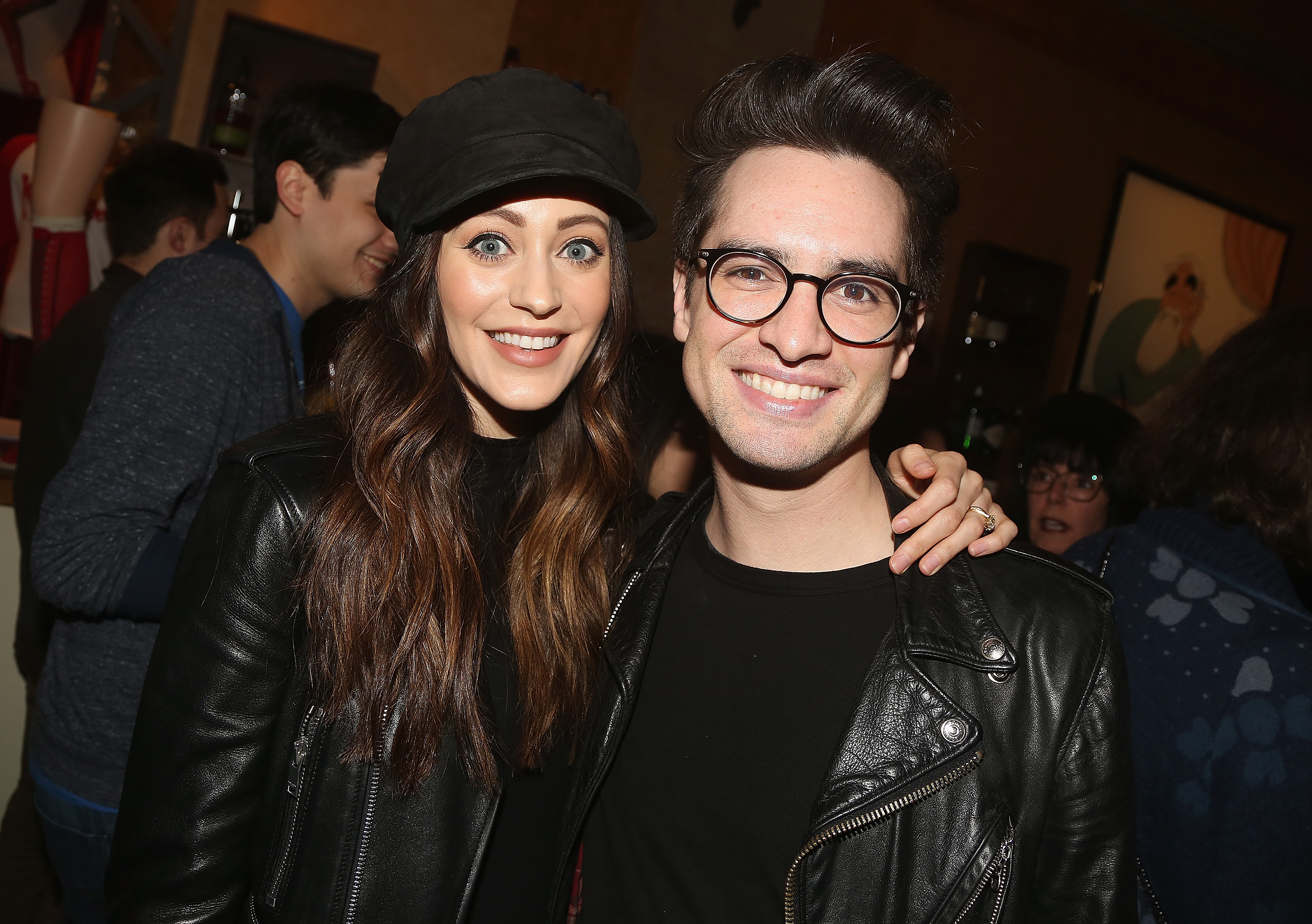 Urie married Sarah Orzechowski in 2013, after dating for two years. They first met after a Panic! at the Disco concert. Although Urie described it as love at first sight for him, Sarah was dating someone at the time. Eight months later, Hayley Williams from Paramore reintroduced the now-single Sarah to Urie and everything fell into place.

The normally low-key couple announced they are expecting their first child soon. Paired with the exciting news was Urie’s announcement that the band would be dismantling, so he can focus on his family.

“The prospect of being a father and getting to watch my wife become a mother is both humbling and exciting. I look forward to this next adventure.”